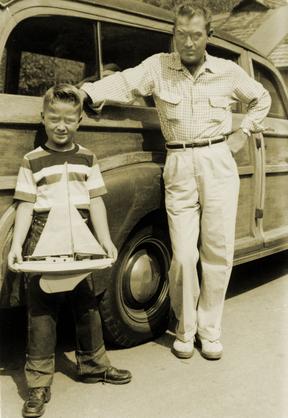 OK, I admit it..that’s me in the photo.  The short one with the stylish wide cuffs and spiffy yacht.  I’ve been a writer since about that time, when my hand-scrawled three-page mystery, The Basketball Bandit, was graciously declined by the major publishers.

Since then, I’ve won more than 60 writing awards, including three Maggies, dozens from Boating Writers International, and several from the American Society of Travel Writers.
As an editor, I joined CBS Publishing to revitalize Sea Magazine, a 45,000 circulation regional.  In four years, I grew

​Sea to become the largest boating magazine in the world with a circulation over 300,000 with four regional editions, a team of 30, and an innovative and entertaining editorial package.​
As an editorial consultant, I've worked with several magazines to freshen their editorial prior to a sale.  I was brought in to rejuvenate The Robb Report, which led to its sale to CurtCo for $150 million.  I helped Boat International launch their Megayachts coffee table books, which then sold to Henderson Capital for 34 million pounds.
I’ve hosted three cable TV shows with 14 million viewers, and appeared on the Oprah Winfrey Show as an expert on the luxury lifestyle.  I’m the author of nine books, with three more under contract.​

​     In the process of all this, I've delighted literally millions of readers as well as hundreds of editors.

"Reading Caswell leaves you licking your lips and wanting more..."

"Caswell caught the eye of all the judges with his comfortable, engaging style.."

"Strong reporting, his excitement is contagious..."